Rafting and Cliff Jumping at Royal Base Camp: It Happens All in Nepal

Somethings are not meant for you and for some, all you need is a little courage and a push through!

When I used to see people post cliff jumping pic on social media, I thought what if, they break their spine, what if, you never make it and survive to talk about the adrenal rush. That “what if” always stopped me from doing what I always wanted to do. Although I was terrified by the idea of doing a cliff jumping, I always wanted to try and see how it actually feels. Living in Nepal had given me an opportunity to make many of my dreams come true. 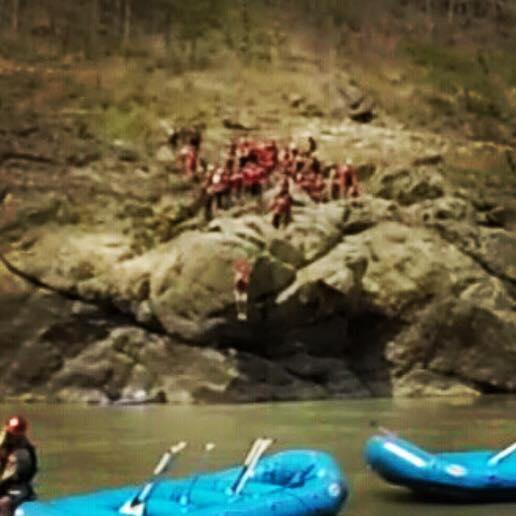 Since 2014, I wanted to go for a river rafting, however, there was always some hurdle along the way. After 2 years of desperate desires, I had an opportunity to go for the river raft at Trishuli river. A place where I worked at was offered a refreshment package. I was thrilled to finally go and raft. To my surprise, in that rafting package, an optional cliff diving was included. I was excited and anxious at the same time. I had butterfly in my stomach, I was debating to weather to do it or not! I gathered courage to make that jump and climbed on the cliff. However, when I looked down, at the river,  I wanted to back out!  My best friend was standing right behind me. But, he was determined until I made that jump he was not going to make his. I was extremely nervous, my heart started pounding. I thought I could hear my heartbeat loud in the air, and it would echo the hills.  And I heard a voice from the boat right below me, a friend of mine screaming, “Pratibha, 1….,,2…,3..” and I jumped off the cliff. I did it!

Later, when I got on the boat my friend told me, if I would not have made the jump then he would have pushed me anyway. He just did not want me to back out on a simple cliff jump. It was once in a lifetime opportunity and I would not have gathered enough courage later in life. I am thankful that I made that jump, otherwise, I would have wondered how it would have been later in life.  All I needed was a little encouragement to make a jump! What a wonderful experience it was. I would have backed out and still wondered how it would have been. Grab the little opportunity you get in life, for tomorrow you do not know if you will get to live the same moment.

Life gives you immense opportunity to go further and get out of your comfort zone, it about that little push. Do not miss them otherwise, you will wonder and regret the those chances you never took!